A Peltier module is an electronic device that has a unique property of heating up on one side and cooling down on the other side when a DC current is passed through it. It uses very little power and can last anywhere between 3 to 5 years depending on the manufacturer. It's a low cost electronic device - a matchbox-sized DIY costs about USD 3.00.

The following components are required to set up the Peltier module method:

The following is a schematic diagram of the Peltier module system to evaporate salt water and collect pure water in the collection chamber. 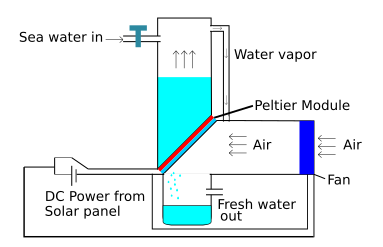 Figure 1 - Schematic diagram of the Peltier module system for desalination of sea water.

The system consists of a heating chamber and a cooling chamber that are built on each side of the Peltier module. Sea water is pumped in into the heating chamber. The heating side evaporates the sea water. The water vapor is then conducted into the cooling chamber. The cooling chamber consists of a fan that sucks in air from the environment and pushes it on to the cooling side of the Peltier module. When the water vapor and the air mix and come in contact with the cooling side, they condense and form water droplets. These droplets are then collected in a fresh water chamber and pumped up into tanks and can be used for drinking or transportation.

The fan and the Peltier module unit can operate on solar energy.

A solar desalination dome is a variant of other solar desalination devices. It maintains a steady supply of sea water by gravity and water pressure and creates water vapor constantly. This can be collected in a collection chamber and used for drinking purposes. This method is slower than reverse osmosis or the Peltier method, and uses no electrical energy to desalinate sea water.

The following components are needed to build the solar desalination unit: 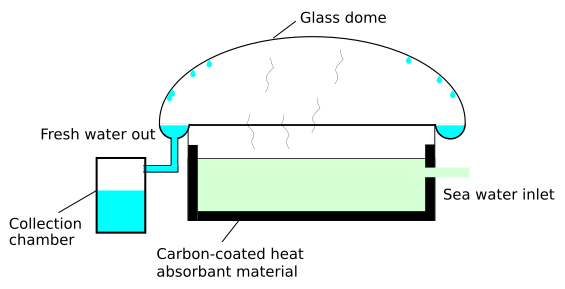 Note: In this process, the salt saturation is constantly being reset as new salt water keeps entering the heat absorption basin. Concentration of brine is negligible and is automatically released in small amounts in the sea water.

As the water droplets join one another, their weight increases, and they start trickling along the inner side of the glass dome to a channel that runs along the diameter of the glass dome. This channel has an outlet where fresh water is collected.

Mixing water from both methods

Once both units function as desired, water from both collection chambers can be connected to a storage unit and used for drinking purposes.