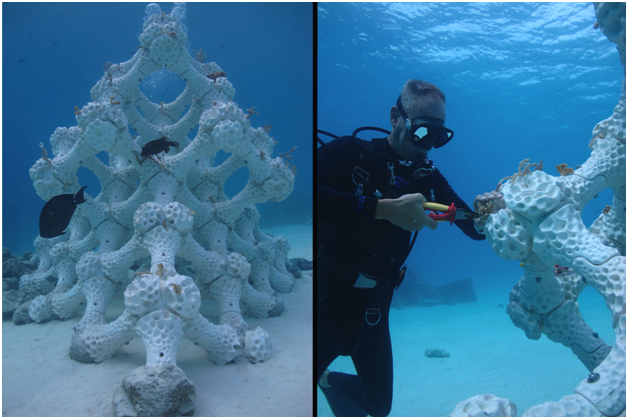 In 1997 the first Saya de Malha expedition was conducted by Wolf Hilbertz, Thomas Goreau, Kai Hilbertz and Caroline Mekie. Due to the distance and cost of getting there, only 1.5 days could be spent on site on the North Bank. Several dives were conducted, about 1.5 hours of underwater video was taken documenting the fauna and flora, and a small Biorock™ coral nursery was constructed, powered by a single floating solar panel. The area was found to be dominated by seagrasses, but small coral reefs were found with a very high diversity of coral and fish species.

Surprisingly these reefs were not dominated by any one group of corals, as is typical of most Indian Ocean reefs. Instead the coral populations consisted of small numbers of many different groups of corals, widely distributed. The larger corals were mostly rounded heads of Porites, or clumps of columnar Heliopora or Millepora, with smaller corals of many kinds around them. Many corals were observed to be loosely attached to the bottom, and many were being attacked by boring sponges, by several distinct coral diseases, or had algae overgrowing their edges.

Dr. David Vaughan at the Mote Laboratory is growing coral 40 times faster than in the wild. The lab takes a coral that is about as big as a golf ball and cut it into 20 to 100 micro-fragments. Each fragment grows back in a few months. Detailed information and links are available in the Micro-Fragmenting report.

Previous
Preliminary Research and Documentation
Next
Coral Printing and Design